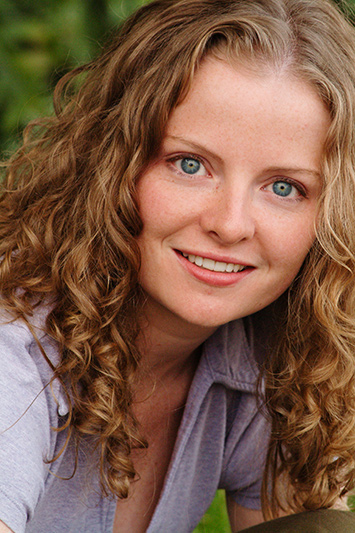 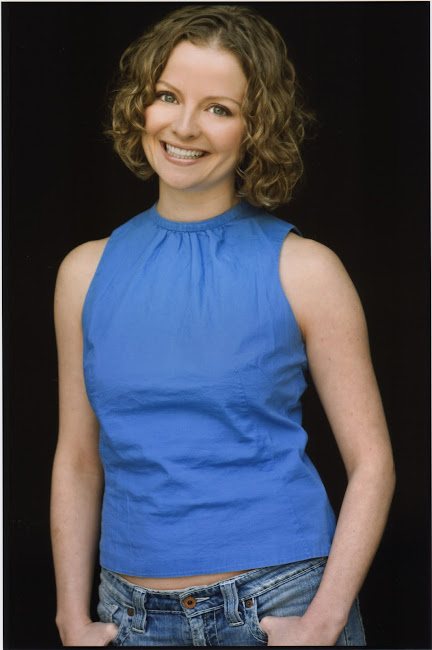 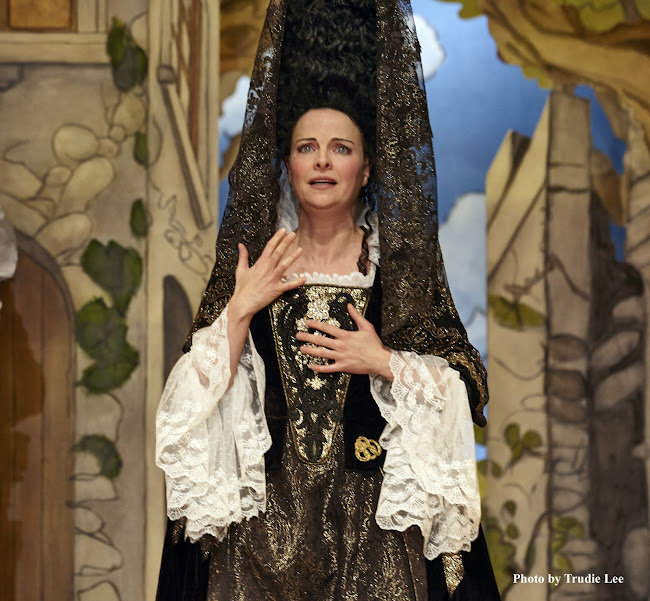 'Keiley has obviously encouraged Crews and Cummer to throw caution, decorum and subtlety to the wind. They are every bit as foolish as the actual fools in Twelfth Night, as well they should be given their silly excesses of love. So often in productions of Twelfth Night the scenes involving Orsino, Viola and Olivia grind the merry mayhem of the clowns to a halt, but, in this production, these scenes are almost as riotously rambunctious.'


'Anna Cummer, as Olivia, got the style. She channeled Megan Mullally from Will & Grace with her type of vocal performance. She really took Twelfth Night from what we traditionally know – this melancholic take on love – to a wonderful character arc that brought her to this tour-de-force final moment. From Lady Macbeth to this, Anna Cummer has really run the gamut.'

Anna was nominated for "Outstanding Performance by an Actress in a Comedy or Musical" Betty Mitchell award for this performance. 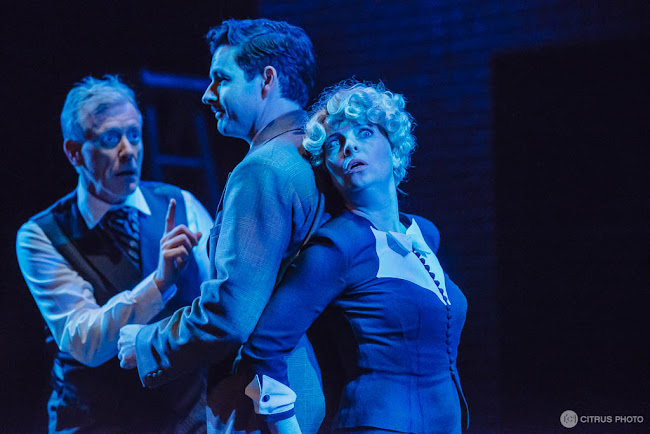 'It’s physical comedy and it’s mad fun. Crews and Cummer have perfected their interaction together, especially with Cummer as Pamela handcuffed to Crews.'

'It is impossible to heap enough praise on Cummer, Curtis, and Pederson but what impressed me most is how they make it seem so easy and spontaneous when it is anything but.'

Anna was nominated for the "Outstanding Performance by an Actress in a Comedy or Musical" Betty and won the 2018 BroadwayWorld Calgary award for Best Actress in a Play (professional). 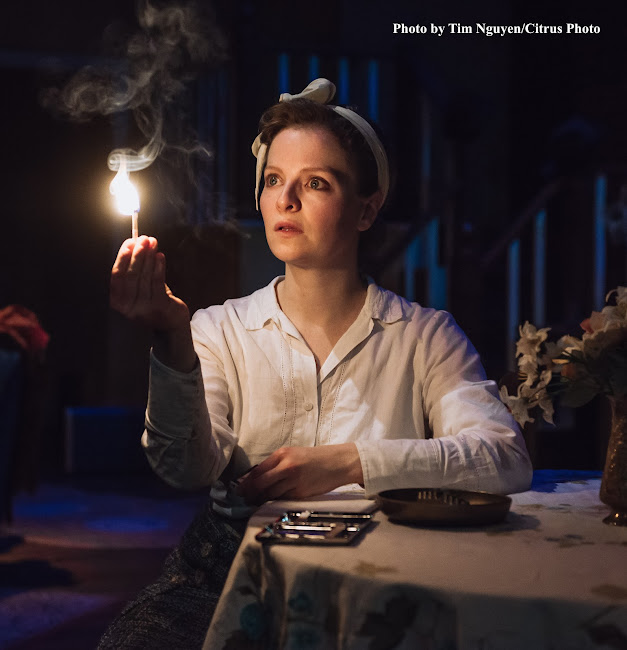 'Even if you do know what waits for you at Vertigo, you’re still in for a great time because Cummer is such a fine actor and the real fun is not squirming and screaming but watching her figure out what is really happening and deciding how to deal with it. Cummer gives Susan a sense of humour, especially about her disability, and a razor sharp mind.'

'I really enjoyed watching the different techniques Anna and Susan utilized like counting steps and tapping items to find her way. Her performance was clearly well-researched, and well-rehearsed; her terror seemed genuine, her cunning was clearly executed, and I followed her journey with ease. I think she led the cast very well.'

'Cummer is at her best as Susan and if there is anyone who is most convincing running around a stage in pure terror, without her sight, it's Cummer.'

Anna was nominated for the "Outstanding Performance by an Actress in a Drama" Betty Mitchell Award for her portrayal of Susan. 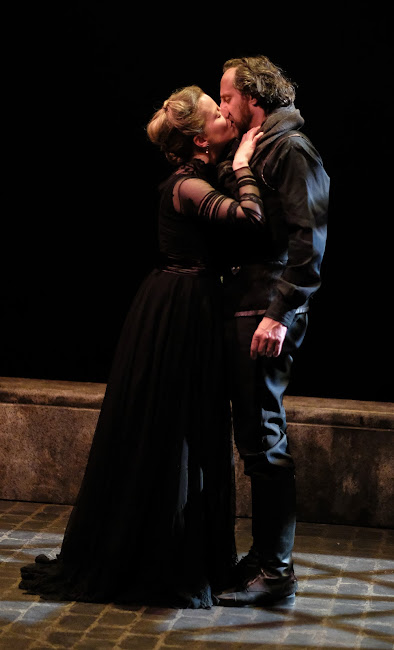 'In this cauldron of technical excellence stride Haysam Kadri's Macbeth and Anna Cummer's Lady Macbeth, titans of assurance and poise in command of not only their characters but Shakespeare's verse...Initially, Cummer's Lady Macbeth is a fortress of resolve so watching her crumble is devastating. Her sleepwalking scene is riveting because Cummer shows us the regret that is destroying Lady Macbeth, robbing her of the sleep she needs so desperately.'

'Cummer is absolutely enthralling as Lady Macbeth. The emotionally nuanced performance really digs itself deep under the character's skin to bring out the darkness that lurks inside a seemingly good person. And who better to flesh out that darkness than Cummer, a magnificently articulate actress. Her power over Kadri's Macbeth is absolute as her words sting like the most venomous snake in the jungle. The sleepwalking scene is made even more interesting by the fact Lady Macbeth's crushing power turns against her, destroying her in the process.'

Anna was nominated for 'Best Actress in a Play' 2016 Calgary Critics Award and for the "Outstanding Performance by Actress in a Drama" Betty Mitchell Award for her Lady M. 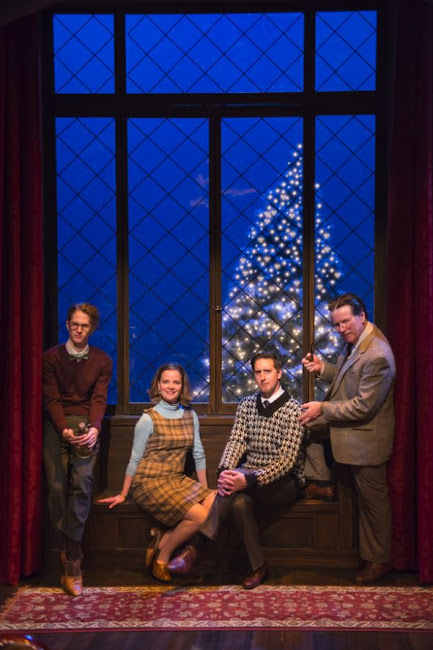 'Yes, this is a great ensemble cast but Cummer manages to shine just a little brighter than her co-stars because she gives us such a layered, nuanced characterization. Her Mollie is the true centrepiece of this whodunit'

'Cummer, particularly, can do things with her voice that Lebron James does with a basketball - she's a vocal virtuoso, darting between dainty and hollering like a Liverpool longshoreman.'

'Cummer's Mollie tries desperately to keep the house running smoothly while also trying to keep the peace between the guests. Cummer knows how to make small physical moments sing.'

The cast of The Mousetrap was nominated for the Best Ensemble Award at the 2016 Calgary Critics Awards. 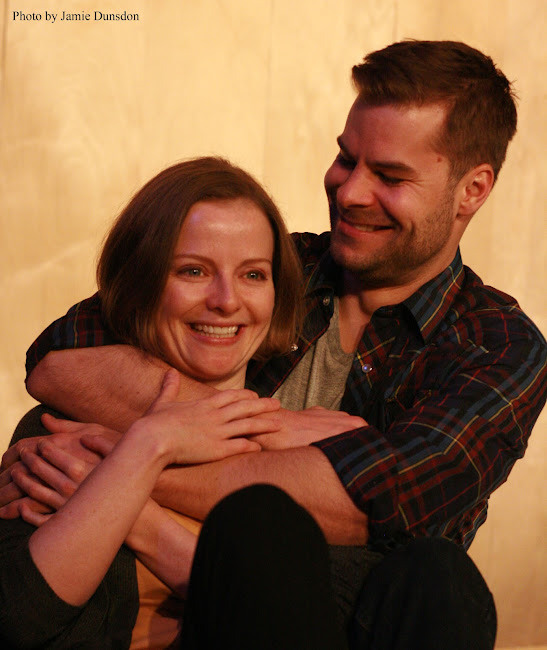 'Cummer delivers a memorable stream of consciousness monologue about the pros and cons of having a child at this moment in history, counterpointing it with her own female mythology around childbirth. They are ten of the more astonishing minutes you will ever see on a stage...Stripped of all manner of artifice, the play produces a pair of dazzling performances from Jespersen and Cummer.'

'For Cummer in particular it is a brave, honest performance as heart-wrenching as it is frustrating and annoying, again, maybe just for me but there were times I had to bite my tongue to keep from telling Cummer what she was doing to my patience and nerves...Navigating MacMillian’s words with such fearless precision and insight, Cummer, Jespersen and their director Jamie Dunsdon put my emotions through the wringer …'

'Cummer and Jespersen match the velocity of MacMillan’s fearless script. Cummer is fantastic in drawing out so many emotions from the audience. And there is this one powerful moment, which demands to be seen, where Cummer simply nails it. Never has a theatre gone so quiet. And Jespersen is there with Cummer every step of the way. Rarely do a pair respond to and match so well what the other brings to the table.'

Anna won the 'Best Actress in a Play' 2015 Calgary Critics Award and was also nominated for the "Outstanding Performance by an Actress in a Drama" Betty Mitchell award for this performance. 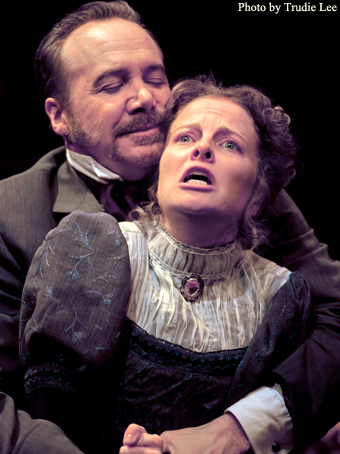 'Cummer (hitting every hysterical note perfectly) is completely believable as a neurotic, borderline personality early on, which makes her transformation in the finale that much more satisfying to watch.'

'Cummer adeptly handles a role that in lesser hands could be overwrought or annoying; indeed, she gets the audience on her side.' 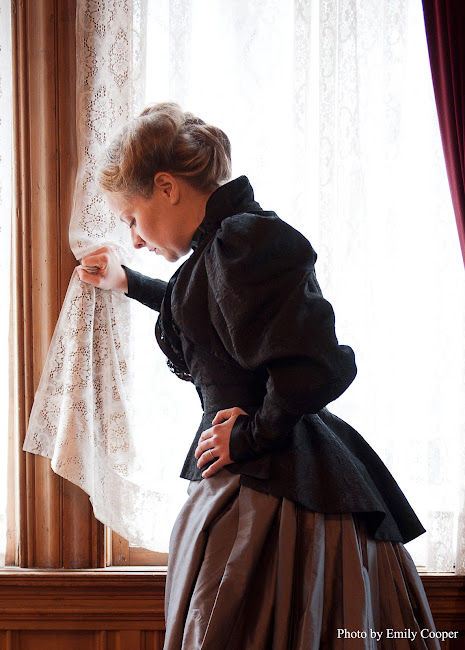 'In her impressively intelligent performance, Anna Cummer makes Hedda a bright-eyed sociopath, a woman who lives in a barren world of her own but who is also, paradoxically, a bereft idealist, a soul searching for a connection to beauty that it’s impossible for her to make. Yes, I laughed when this Hedda said of love, “Oh, don’t use that sickening word,” but I was creeped out too. It’s a fine piece of work.'

'Anna Cummer powerfully internalizes Hedda’s anger and anguish, showing emotion through her eyes like a film actor in close-up.'

'Throughout, Cummer is like a tightly wound violin string, ready to snap at any moment. One moment she’s feigning friendship, smiling and drawing Thea into her parlour like a spider with a fly; the next, with eyes glittering, she’s glacial. Smoothing down her elegant grey silk gown, Cummer seems to be physically trying to contain Hedda’s fury with her bare hands.'

Anna's 'Hedda' was nominated for a Jessie Richardson award in the Lead Actress (Small Theatre) category. 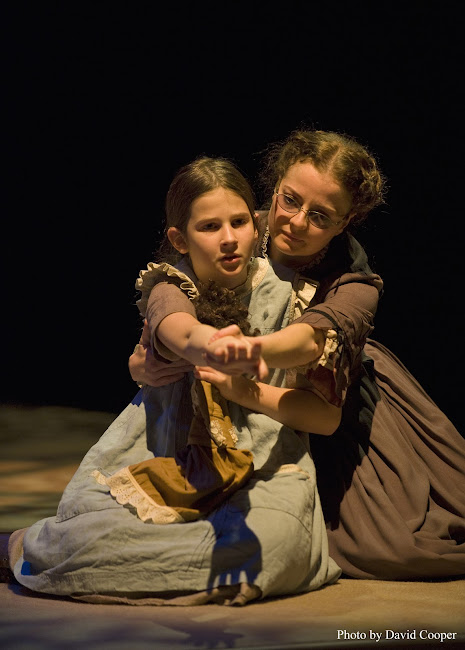 'Anna Cummer as Annie Sullivan was a pleasant surprise in a very difficult role.'

'Kudos too to Anna Cummer as Sullivan, stern in her disciplined approach to teaching yet terribly troubled by her own haunted past.'

'Her Annie maintains some of Cummer's natural comic radiance (and her sweet high voice) but shows a spine of steel as she determines how to get through to Helen...it's when she and Helen go one-to-one, alone on stage, that it becomes a magical place.' 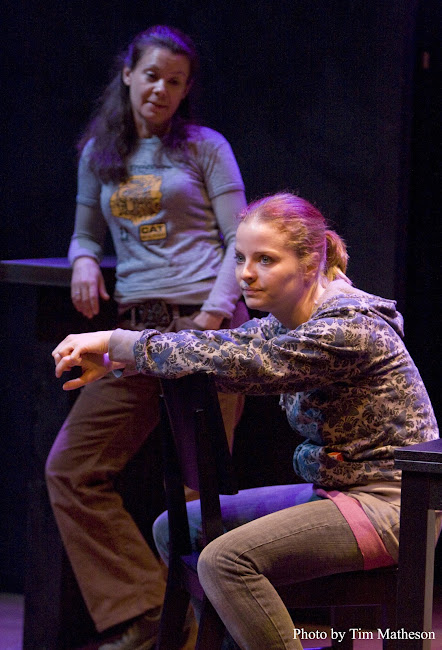 'Cummer is also terrific as Brooke. Looking remarkably like a young Jody Foster, she maintains a luminous vulnerability as she shifts from the precocious adolescent who can hardly believe how stupid adults are to desperate freaked-out junkie.'

'Her (Anna's) portrayal of the cold turkey treatment is electrifying as Brooke rushes from door to door looking for escape.'

'Anna Cummer is lippy and touching as Brooke.' 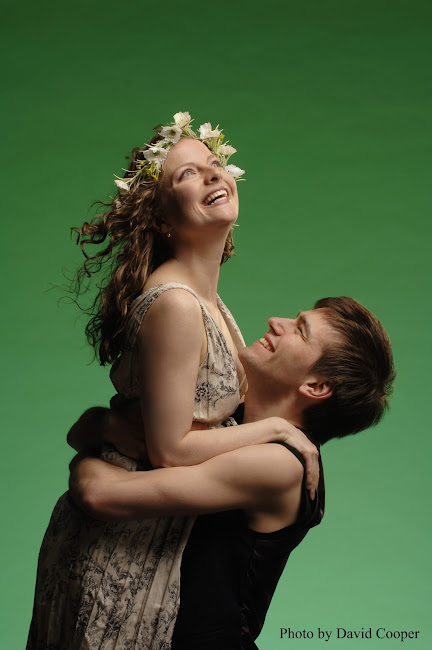 'Cummer, in particular, ably portrays a young girl on the edge of womanhood, working what she's not entirely sure she has to get her Prince Charming.'

- Michael Harris, The Globe and Mail 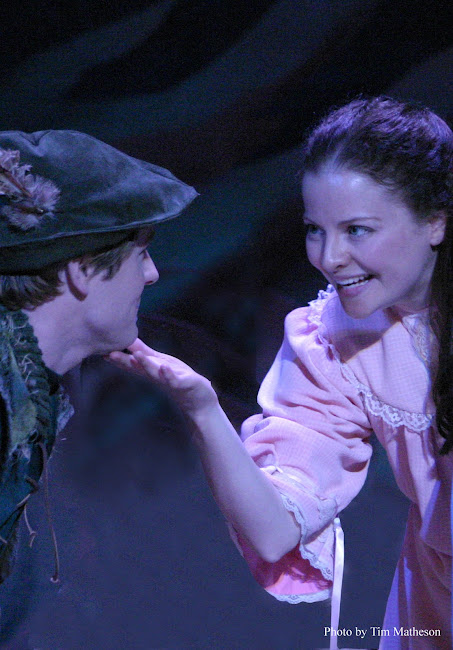 'Anna Cummer makes a hilariously ferocious and flirtatious Wendy in this production.'

Anna was nominated for a Best Performance Jessie Richardson award in the TYA category for 'Wendy'. 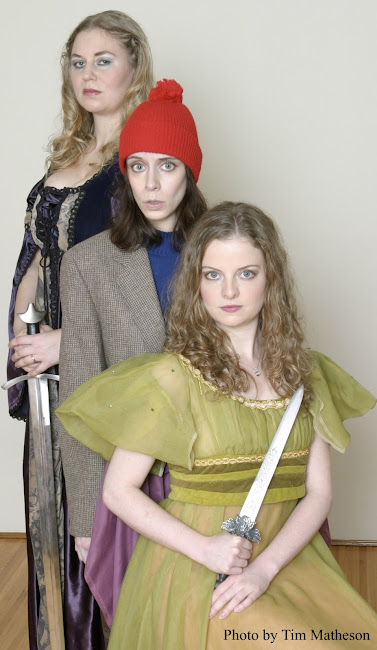